More than 50 years ago today, 20 million Americans took to the streets, across college campuses and hundreds of cities, “to protest environmental ignorance and demand a new way forward,” say officials for earthday.org. The activities of that day helped to spur the passage of new environmental laws in the U.S., they say, including the Clean Air Act of 1970, the Clean Water Act and the Endangered Species Act of 1973. The same period also marked the establishment of the Environmental Protection Agency (EPA).

This year, Earth Day lands with renewed gravitas, as President Joe Biden hosts a Leaders’ Climate Summit, inviting more than 40 world leaders to gather virtually. But executives of door and window companies remind the industry that sustainability is about much more than a one-day effort or celebration. The industry has a responsibility to operate under the tenets of sustainability every day, suggests Jeld-Wen president and CEO Gary Michel.

“As part of the building products industry, we all have a responsibility to utilize natural resources efficiently and to design products with sustainability in mind, from responsible sourcing to considering the full lifecycle of the materials we use and the products we manufacture,” Michel says. Over the past 60 years, Jeld-Wen has invested in initiatives that “benefit the environment and society,” Michel suggests, “including making sustainable product design and manufacturing integral to our business, responsibly sourcing renewables, and delivering innovative, energy efficient products and solutions to our customers.”

Two other manufacturers, Andersen and ProVia, are celebrating on the heels of consecutive Energy Star awards for sustained excellence. In a companywide video message, ProVia president and CEO Brian Miller says his company is commemorating the accomplishments of its employees by having executive leadership cook and serve breakfast this week, across five of the company’s locations. 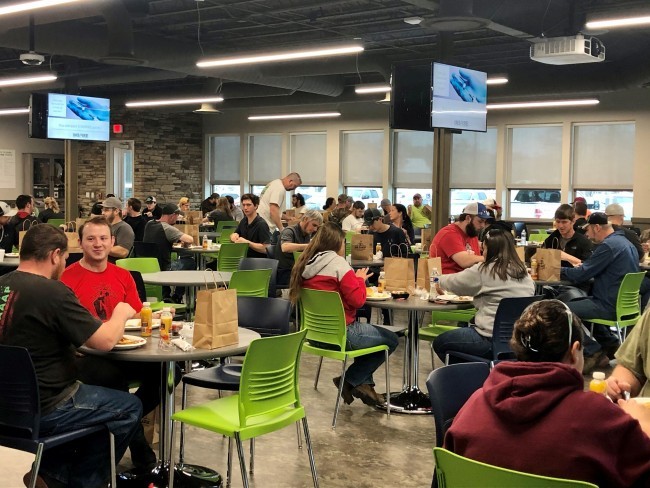 ProVia’s corporate leadership team is cooking breakfast this week at each of its locations.

“Brian’s intent in doing this is to put the recognition back to the employees,” says the company’s director of corporate relations, Joe Klink. “As a company, we got this award, which sits on the counter in our lobby, but it really comes back to all of the employees coming in every day, working hard, making good products, and our engineering team engineering good, efficient products that homeowners can enjoy and use to save energy.”

The recent award marks the company’s 14th from Energy Star, Miller says in his video, adding, “Just listen to this lineup. We’ve had four recognitions for Partner of the Year; nine for Partner of the Year Sustained Excellence; and one for Excellence in Promotion. What an accomplishment. We want to celebrate these awards, along with what you’ve done and accomplished,” he tells employees.

In addition to a recent multi-consecutive Energy Star award, officials for Andersen Corp. say they’re pausing to celebrate several long-term accomplishments, including reducing water usage by 38% per unit produced, reducing energy usage through relighting and other efficiency projects, and saving more than 9% in fuel usage.

Today, Andersen is committing to work with a group of students from the University of Minnesota to plant a pollinator garden at a nearby middle school, close to its headquarters in Bayport, Minn., Smieja says.

“This small, but impactful project will provide habitat for key species in our ecosystem and also provide a learning experience for students for years to come,” he says. “It will also provide a group of Andersen employees the opportunity to get outside and volunteer safely this Spring.”

Meanwhile, at the White House, the Biden administration is heralding a new Special Presidential Envoy for Climate, which holds a seat on the National Security Council, to cement climate action among the nation’s top priorities. A recent executive order formally establishes the White House Office of Domestic Climate Policy, led by a new National Climate Advisor and Deputy National Climate Advisor. The move creates a new central office to coordinate and implement the President’s climate agenda—including a plan to invest $213 billion into construction and retrofitting of energy efficient homes and buildings.