AMD Members “Lay it all Out” in Industry Roundtable

Members of the Association of Millwork Distributors participated in a roundtable session yesterday where they were able to ask questions and share concerns. DWM/Shelter editor Tara Taffera was lucky enough to sit in at one such discussion and learn what is keeping members up at night and what they are happy about post recession.

First up on the topic list was attracting employees. One member from a small, family-owned company said he has had great luck recruiting for sales positions from local colleges such as Texas A & M. Another member has had success finding inside sales employees using local employment agencies. 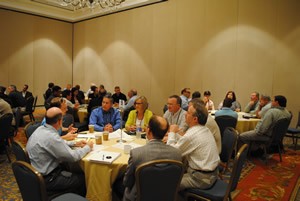 AMD members participated in a roundtable where they shared mutual concerns and exchanged ideas for everything from finding good employees to transportation issues.

They joked that’s its all about how you search and advertise. “We don’t advertise in the paper for a fingerjoint machine operator,” said one attendee.

Along with this type of recruiting comes with the need to educate. Participants say that for a new employee in sales, for example, they put that individual in all aspects of the company to learn the entire process. Once they know how the company operates then they can learn about sales.

“The last ten years hasn’t been conducive to bringing people in,” said one participant. “But now we have weathered the storm and it could be a career for new employees.”

Next on the discussion list was technology and the topics included everything from social media to software programs and apps that can help with logistics.

“We are trying to free up sales reps so they have more time to sell,” said one participant, whose company has streamlined processes through a new computer program that helps its employees do just that.

But not all in the industry have moved toward technology.

“I still get orders on bar napkins,” said one. “Then you have those who want to do it all electronically and don’t want to talk to anyone.”

The technology discussion also circled back to finding new employees. “Technology in our industry will only help us attract younger people,” said one.

The next question centered around what was learned post-recession.

“We learned how to work more efficiently” said one.

“Before we were glorified order takers,” said another. “Now the whole world has changed as far as how we go to market.”

Another change was summed up in one word: “margins.”

A big topic was delivery and how companies manage those costs and logistics.

On the upside post-recession it seems people are buying machines again. One person at the table reported that he just purchased three door machines–a sign that things are definitely looking up.