“You know how you have those collapsible doors … like the glass doors … so you can open this up and see that side of the door?” 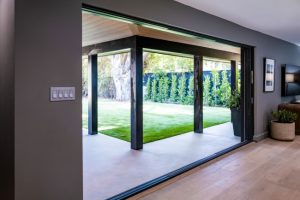 That’s how actor and comedian Kevin Hart described his vision for sliding glass doors to HGTV home renovation personalities Drew and Johnathan Scott, from the show Property Brothers. The trio starred in an episode of HGTV’s Celebrity IOU—a new series that features “Hollywood A-listers” who “express their deep gratitude to the individuals who have had a major impact on their lives,” according to the show’s description.

The project included a complete makeover of a backhouse at trainer Ron “Boss” Everline’s home in Los Angeles. After Hart was severely injured in an automobile accident, Everline helped him to physically recover through intense workouts and rehab, Hart said, helping him to walk again and regain his strength. 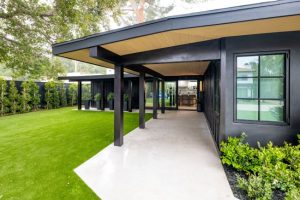 “He’s a brother and I love him to death … He was a motivating force that was much needed at that time,” Hart told the Scott brothers in the episode, while helping to direct and participate in renovations.

The project, which converted a dilapidating backhouse into a new “man cave,” included dark colors. “These thin black famed windows … it feels like something you’d see in a cool commercial spot in New York,” Drew Scott said, describing the Vacaville, Calif.-based manufacturer’s doors and windows. Sliders were used to blend indoors with out and to add natural daylighting. 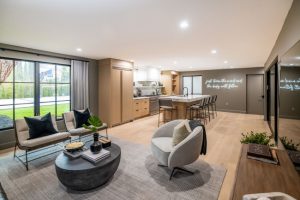 The brothers selected All Weather’s products partly based on performance, they said, adding, “These are thermally broken windows, which means they’re high-performance insulators, making them incredibly eco-friendly, giving us both the function and style that we need while sealing up the space.”

While revealing the space to Everline, “Indoor-outdoor living at its best,” said Jonathan Scott, sliding back a paneled door. “This is a small token of my appreciation,” Hart told his friend.