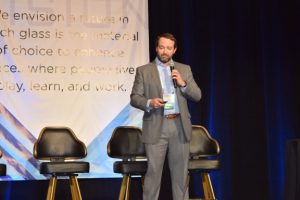 Ace Glass president Courtney Little explains how to negotiate a good contract at the BEC Conference.

According to Courtney Little, president and general counsel for Ace Glass, contracts can have a major impact on contractors’ project experiences. For this reason, at this year’s Building Envelope Contractors (BEC) Conference in Las Vegas, Little explained what contract glaziers should consider when negotiating.

In a session titled, “Job Negotiation: Signing a Good Agreement, then Running the Job,” Little, who is also president of the American Subcontractors Association (ASA) and a columnist for DWM sister publication USGlass magazine, said the organization recommends that contract glaziers use ConsensusDocs 750 (a standard form of agreement between contractor and subcontractor) for their contracts, which can serve as a guideline for contract addendums.

“There’s never been a lawsuit over the language of the contract. It’s the strongest, best construction contract out there,” Little said. “There’s been no litigation.”

“Make sure you don’t provide something you didn’t price,” he said.

Payment should be made by the due date, according to Little, who suggested setting interest payments that start after the due date passes. This also gives the subcontractor the right to stop work until they’re paid.

“This requires a five-day written notice of intent to suspect and 21 days later you can terminate the contract,” he said. “If you pull out early and don’t have a good contract you could be liable for the damages.”

Adding a clause about backcharge claims to a contract can require the treatment of backcharges similar to change orders, he suggested. This provides the subcontractor with a reasonable time to fix a problem and protects them from backcharges that suddenly appear at the end of a project. It also limits the general contractor’s ability to withhold payments from the glazing contractor. Little suggested maintaining accurate and detailed documentation of the project to protect from backcharges.

Project schedule concerns should also be considered when signing a contract. This allows contractors to recover money for any schedule changes that have an economic impact and requires that the subcontractor be provided with a reasonable time to perform the work.

“You can also terminate a contract if there is a delay greater than 90 days,” said Little. “You should have the right to say that a project no longer fits in your schedule.”

He recommended that contract glaziers participate in all available scheduling meetings and be clear about the time required to perform their scope.