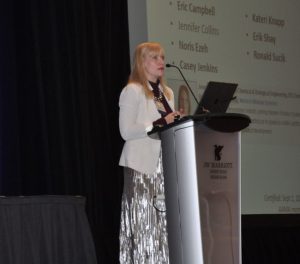 Members of the American Architectural Manufacturers Association (AAMA) are meeting this week in Phoenix at their annual conference, and it looks a lot different than in the past. This includes duplicate sessions — for those who miss an important speaker, they have an opportunity to catch it on another day. Additionally, fewer sessions are happening at one time, as opposed to as many 80 breakout sessions happening during a conference in the past.

“If you are coming here, we want to make sure you are getting everything you can out of these events,” said Janice Yglesias, association services director. “We have a slew of speakers this year,” she added.

The association also added a new chat feature to its mobile app, which encourages members to connect with each other throughout the conference.

AAMA president Rich Walker pointed out in this morning’s opening session that the association has added 11 new members since October 2016. Additionally, 47 new participants are here in Phoenix.

Angela Dickson, marketing manager, noted that the FenestrationMasters program continues to see growth. But the big news from the marketing side is the launch of the new AAMA website.

Then it was off to individual meetings, including the Vinyl Materials Council (VMC). The room was full to capacity as members discussed various topics related to this material, including results of a three-year outdoor weathering study performed on commercial white rigid PVC profiles.  Of the samples, the most weathering occurred at 12-18 months, reported Tony Vella, Vision Extrusions. “There wasn’t a lot of change after two years,” he said.

While some, including Vella, wondered if the testing should continue after two years, others, including Ray Garries, MI Windows and Doors, countered more testing is needed as technologies in our market continue to evolve.

“We need to push the envelope,” he said. “If we don’t move forward … we will be farther and farther behind on longer and more durable products–and AAMA needs to be at the forefront of that.”

Cristen Baca, Simonton Windows, said yes, we need to move forward, but the market should be driving that “instead of us legislating it.”

After further discussion, the group asked for many of the vinyl extruders in attendance to offer samples to be used for further testing.

The VMC Education Committee reported that the AAMA board has eliminated individual AIA courses. As the VMC had already devoted dozens of hours to development of these courses, Mark DePaul, ENERGI Fenestration, said the group is now working on turning these into white papers.

Vella also gave an update on various issues surrounding vinyl, including Health Product Declarations (HPD). “It is unclear in the vinyl market is these are being widely accepted,” he said. “We hear a lot about HPDs, but in the vinyl world there isn’t a lot going on.”

Finally, he gave two good resources to members that can be used to counter the many attacks against vinyl from various activists. The Vinyl Institute created a website called vinylverified.com where the VI is able to refute many of the misinformation put out by some. In Canada, there is a website called Let’s Talk Vinyl, which Vella said can be a valuable resource as well.

The conference continues through Wednesday. Stay tuned to dwmmag.com for more reports from the event.