A No-Holds-Barred Look at Labor Shortages 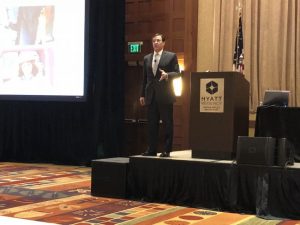 John Manzella gives some staggering statistics related to the labor shortage and offers advice to meet these challenges.

Most seminars tend to be a one-way flow of information: from speaker to audience. John Manzella, a world recognized speaker on economic trends and globalization, said he preferred a “very large roundtable”—one that might help members of the American Architectural Manufacturers Association (AAMA) to solve issues pertaining to labor shortages and workforce skills. Though the session was large and opened to all members, Manzella dubbed the gesture a signaling that he wanted the event to be an open exchange of information.

He started with good news: the fact that the unemployment rate is at 4 percent, but then drilled down on some related challenges.

“The biggest problem is the worker participation rate, which is dismal and continuing to decrease,” he said. “If you think you can’t find labor today, chances are the situation will only become more severe.”

This is exacerbated by the opioid crisis.

“Many men on disability are actually on opioids,” Manzella explained.

Then you have the 10,000 baby boomers reaching retirement age each day, who take their skills with them when they exit the workforce. These baby boomers can’t be immediately replaced by a recent college graduate who may fill that role, he said, adding that only 40 percent of four-year college students graduate on time.

“They can’t take a job, because they are still in class,” he said.

He then proceeded to break down the real economic effects all of this is having on U.S. companies.

“There is an annual lost revenue of $1.75 trillion dollars each year for U.S. companies,” said Manzella. “If you can’t find labor, you can’t grow.”

Before you close up shop and go home, however, there are ways around this, he said, one of which includes increased wages. Though, he acknowledged that a lot of companies can’t afford to do that in the current climate.

“While wages aren’t increasing, more money is being put into benefits which are going up quite a bit,” he said.

Manzella also shared his thoughts on the immigrant workforce and pointed out that a big percentage of growth comes from this group, specifically.

“To me, it’s very important that we continue that,” he said. “You have heard a lot of negative news about immigrants, but they are less crime prone … they are very incentivized to do a great job.”

So with everyone struggling to find labor, Manzella shared a very powerful fact.

“Recognize that knowledge is the only sustainable competitive advantage. It’s all about training,” he said. “If you keep training your people and they have fresh knowledge, they are more likely to stay.”

In cases where workers don’t have to come from four-year colleges, Manzella said that apprenticeship programs have really worked well in Europe, but, “In this country there is a negative stigma, if you don’t go to college … maybe high schoolers are the next step.”

In that vein, he encourages companies to reach out to community colleges and high school counselors, in order to encourage them to send candidates.

When Manzella encouraged companies to share their stories and challenges, a concern surfaced from one attendee, who shared his concern about baby boomers retiring. He also offered some advice.

“We need to collect that information from these valuable employees and we have to collect it fast,” the attendee said. Ultimately, Manzella got his wish (for a roundtable discussion), when others chimed in with responses, reiterating how the issue resonates throughout an industry.