In his 2014 State of the Union address, President Obama called for a federal minimum wage hike of $2.85/hour to $10.10. According to whitehouse.gov, raising the minimum wage nationwide “will increase earnings for millions of workers, and boost the bottom lines of businesses across the country.”

But not everyone in the door and window industry agrees. 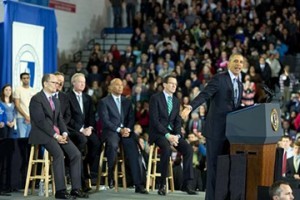 “If the government mandates a minimum wage increase, it’s going to cause a snowball effect and force costs to go up everywhere. In the long-run that affects whether people can afford to buy things – whether it’s windows, food, whatever,” says David Barnes, president of Viwinco Windows. “It’s only common sense. As soon as everybody’s direct costs go up, there are going to be price increases.”

That will be the case for Windorco in Seattle. The city made history by voting to gradually raise the minimum wage to $15 an hour, the highest in the U.S.

While his company starts at wages higher than $15 an hour, Gregory Staats, owner of Windorco, says the requirement will have indirect effects on his costs. In the long-run, he says, “We [will] have to charge more for what we do and it puts me at a competitive disadvantage against companies that are doing business outside the city.”

However, some Seattle business owners applaud the city’s landmark legislation. Rick Locke, owner, of Windows, Doors & More is in favor of the new requirement.

“I think it’s great. I don’t have anybody on my team who makes less that $15 and I never intend to … I wouldn’t say it would have a negative impact on my business [though] it will raise costs, which will be passed onto the customer,” Locke says. “I agree $30,000 a year is a minimum working wage that most people should make … We continue to fuel a have and have not society, which I think is problematic.”

Since President Obama’s address, 13 states and the District of Columbia have increased their minimum wage.

How do you feel about the current minimum wage debate? Leave a comment below.