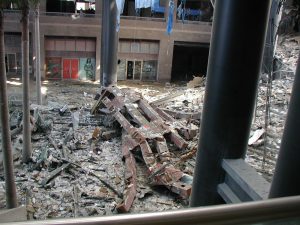 Almost everyone remembers where they were that Tuesday. Whether at work, in traffic or at home, hearing the news of the first plane to strike the World Trade Center on September 11, 2001, was surreal. We gathered around televisions and watched, trying to comprehend what was happening that fateful day, which took the lives of nearly 3,000 people. In the days and weeks that followed, we were reminded that 9/11 would be a day that we would never forget. And we haven’t.

The tragedy of 9/11 affected every American differently, but none were impacted on the level as those living and working in the New York area. USGlass (sister magazine to [DWM]) blogger and columnist Paul Bieber was working at then Floral Glass in New Jersey, located across the Hudson River from Manhattan.

“I saw the second plane hit, and I saw the buildings go down,” recalls Bieber. “I heard the noise … it scared the daylights out of me. I was nervous and upset. I can still see it; I still remember, and I hope it never goes away. I don’t want to forget it.” 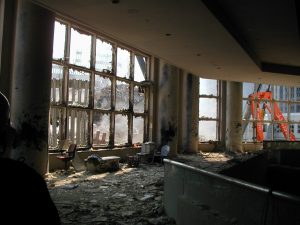 Looking back, he says everyone at work came together to talk about what had happened. “We said a prayer, silently, each of us in our own way. We were just silent, quiet.”

He adds, “It was quite an experience. It changed the entire psyche of the country, but for 20 million New Yorkers, it really changed.”

Two days later, Bieber was at Ground Zero with some people who needed to buy glass.

“At the time, Floral Glass was the closest temperer to the city,” says Bieber, noting the company provided insulating, tempered and laminated glass for about 15 buildings in the aftermath. 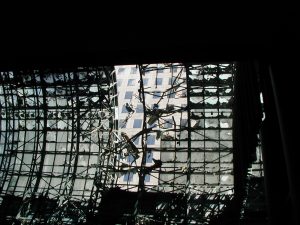 W&W Glass in Nanuet, N.Y., is one of the country’s largest glazing contractors and does a significant amount of work in Manhattan. One of the managing partners, Jeff Haber says within days of 9/11 they were called in to help with rebuilding efforts. In particular, he says a client called them to help at the World Financial Center and Winter Garden located across the street from where the World Trade Center stood. Haber recalls the glass atrium of the Winter Garden was severely damaged, with almost all of the glass blown out and vast girders of the North Tower collapsed across it.

“[The area] was a literal war zone … you had to get past the military to get through,” says Haber. “ … Standing 100 yards from what was the North Tower and there were thousands of people still searching for people. It’s one of those things you’d like to forget, but it’s always in the back of your mind. It’s what you didn’t see on the news and the TV shows, the memorials … those are things you never saw.” 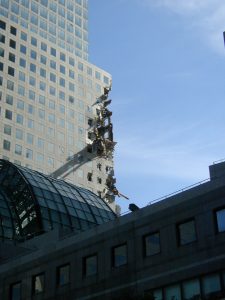 Haber says what’s unique about this project is that the owner, Brookfield Properties, was committed to rebuilding and re-opening the World Financial Center and the Winter Garden by September 11, 2002—the first anniversary.
“Jerry Haber, who was the principal owner in charge of the project at the time, and Scott Kurek, our general superintendent, led a crew of and worked with many designers, engineers, glaziers and ironworkers to rebuild this site. They worked nights, weekends and holidays to get it completed and re-opened by the first anniversary.”

Haber says he and his brothers and cousins were eager to be involved in this important project. “We were younger … in our 30s … and were anxious to get involved. It was one of those things where we had no idea what we were getting involved with, but we were all committed to not failing in our small effort to be a part of something [so important]. Our field guys did all they had to do. They were great, putting in nights and weekends. I remember my dad [Jerry Haber], sitting with the architect, coordinating with our key vendors … Viracon, Pilkington, Super Sky … I remember we went to them all and said, ‘this is what has to happen to [get this job done].’ I know they bumped others to do these jobs, to meet these deadlines. They were critical partners to this job.”

While it was meaningful to be part of these rebuilding efforts, this particular project was special for other reasons. 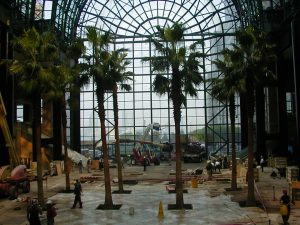 “My brothers and I had the opportunity to work on all the original storefronts and a lot of the original glazing when we were in high school and college,” Haber says. “And to this day, we’re still doing jobs there, and Brookfield Properties is one of our biggest clients.”

In addition to the World Financial Center and Winter Garden, W&W also had the opportunity to be a part of another significant project.

“We were lucky enough to be the glazier for the 9/11 Memorial & Museum,” says Haber.

The global architectural firm Snøhetta designed the pavilion, which stands on top of the underground museum and is the only building on the memorial plaza. Glass makes up 22 percent of the outside of the pavilion. 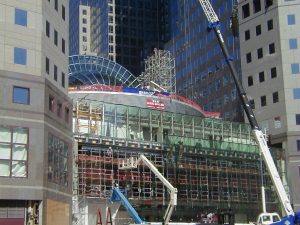 Haber looks back on all of his company’s work in New York since the tragic events of 9/11 and is content.

“We feel we have left our mark. You can’t do them all, and we’ve had our share,” he says. “The whole place has a special meaning to us. If you’re from New York, grew up there, and know all the symbolic things built there to remember what transpired and what was lost, [these projects are] more than just another cool glass installation. They’re a tribute to not only the people but to New York, and everyone in [the entire construction industry] put aside their differences to get things done. All the contractors, the different trades, it was a tremendous coming together of people, and it’s a tribute to the grit of New Yorkers to get that done.”

You can read more remembrances or share your own HERE.