A Chat With Veka’s Kevin Seiling and Steve Dillon 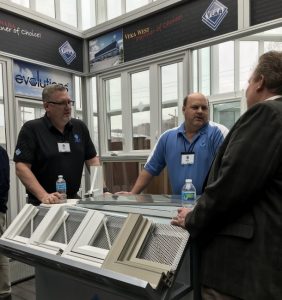 Kevin Seiling, Veka’s vice president of engineering and new product development, and Steve Dillon, the company’s director of marketing, have decades of experience in the door and window industry between them. During a recent visit to Veka’s North American headquarters in Fombell, Pa., near Pittsburgh, DWM sat down with them to chat about the industry and their company. Here are the highlights.

What are some of the biggest challenges facing the industry right now?

Steve: Freight for us is a big challenge. There’s two sides to that. The majority of what we do on the window and door side is box trucks, but our outdoor living products side is flat beds. There’s a lot more work for flat bed drivers. They’re strapping and checking and tarping, so the availability of drivers is minimized. I think the hurricane season has exposed the problems that are out there nationwide with trucking. We have some challenging days here when it comes to freight, but everybody in the industry is in the same boat.

What kind of labor issues  are you seeing?

Steve: Retention is the big problem. We recently looked at the numbers. That first year is key. We lose more people in the first year. I think it’s a generation issue. I really do. It’s challenging. And then, on top of getting people, the next challenge is getting quality people.

Kevin: I think the gap between local retail and what we’re paying entry level is not too big. But we’ve got really good benefits, and once we get them past that first year, they realize “wow, I can make a living; I can grow up and get married and have a family here if I keep progressing.” But for now, they don’t want to work 36 hours one week and 48 the next and work shifts and at night. It’s tough on young people who  have been coddled their whole lives. But once they have responsibility, then they want to stay.

What about Veka’s apprenticeship program?

Steve: It’s a worldwide effort. Germany has really been very involved in training young kids to come and work for them. They’re much further along than we are. Sadly, vocational education in the U.S. became a program for misfits. That’s what the general thought was, that these weren’t skilled people, or they weren’t educated enough or smart enough to sit in a classroom and take tests and learn from books. It’s just a completely false impression. These kids are just trying to find their place in life, and I think a lot of schools started focusing on four-year educations and degrees. But the reality is that most of the kids who go through those four-year programs don’t end up doing whatever their college degree says they should be doing.

Kevin: The young men and women who are getting into our journeyman tool and die program, in the long run, they’ll probably be the highest-paid employees at Veka who work in operations. It’s got the most transferable skills. We also have an operator training program, where we bring people into the plant to work on the extrusion lines. If they show some potential, we put them through an operator training program to fast-track them in their careers and their wages and create opportunities for them to stick around and work their way up through management. In fact, we have two plant managers who started out as packers. They packed lineals in the plant at minimum wage 20 years ago, and now they’re general managers. So it’s a good program.

What about business opportunities in the industry today?

Steve: The housing market is pretty stable right now. There’s opportunity in the door market. We attribute that a lot to outdoor living space. It’s kind of bad for the window side of things, because people are spending money on decks and fences and gas grills, but they’re also spending money on doors, which are the gateway between the indoors and the outdoors. So there are opportunities there. We’ve also seen a slight shift in vertical integration. A lot of companies are backing away from that because of the costs involved with self-extruding, so we’ve seen some opportunities there.

Kevin: When the economy is weak, everybody says “get rid of everything but our high-moving, low-cost products,” and when the economy is strong, then everybody’s starts to branch out and add new product lines that they can get more margins on. Suddenly we have a lot of requests for materials other than vinyls. That and colors.

Steve: In addition to the colors, there’s the value-added services we offer. We can help the fabricator streamline their process by giving them pre-processed parts. That goes hand-in-hand with some of the logistics programs we have. That’s all cost-saving initiatives for the customer, and that’s an opportunity for us.

Kevin: We see the Canadian dollar has gone back to a more traditional level. That will equalize the playing field for the U.S. and Canada, so that’s good. … Also, there’s been a little bit of movement in the industry toward consolidation, but all of it’s been positive. Today, when one company buys another company, it’s generally a strategic fit and they’re generally hands off — keeping them open, keeping the same management, keeping them running. In the past, they’d buy them and consolidate them to squeeze cost out of them. They’re not doing that now. They’re trying to pick and choose good partners and let them run. That’s a good sign that the economy’s strong.

Steve: There was a time in the heyday of the housing boom when we really had too many eggs in a couple of baskets. About 80 percent of our sales were with three or four companies, and we recognized early on that obviously could be a problem in the future. So with the addition of the new plant in North Carolina, and spreading out our business in a geographical sense and a dollar sense, we’re much more stable than we were at that time. You have to diversify. That’s really a worldwide initiative or thought process, so when markets in Europe are doing bad, we can be doing well, and vice versa. Globally, Veka is very strong.

Steve: We’ve been pretty good at predicting the future. Where we’re positioned in the U.S. is attractive to most fabricators, and it’s especially evident today when you consider the cost of shipping. So the fact that we are in most cases not more than 500 miles from major markets, it’s attractive to the fabricators.

How do you see things in the codes arena?

Steve: As far as codes are concerned, I think things are pretty quiet right now because of the uncertainty with Energy Star.

Kevin: Yes, codes are stable. It looks like Energy Star  7.0 is going to be delayed and out of sync with Canada, so that’s not great, but it’s not bad. As far as the impact of the hurricanes, the outcome was positive in that it proved that the building codes work, so I don’t expect to see a lot of changes.