Reports of 84 Lumber facilities closing have been increasing over the past few months, some with barely any notice according to sources in the area. Officials at 84 Lumber say the closures are the company’s efforts to improve efficiency.

News stations and websites along the east coast have reported the closure of several of the lumber and building supplier’s facilities closing.

On December 9, a story by WBOY reported the closure of the Fairmont, W.Va., facility reporting that a sign had been left on the doors announcing the store would be closed indefinitely. Another closure in Baldwinsville, N.Y., was reported in December by Syracuse.com first and later confirmed by HBS Dealer.

When asked about the closures by [DWM], officials responded, “We are always evaluating our stores and in order to increase efficiency, we have decided to consolidate a few locations into existing stores in the market,” said Amy Smiley, the vice president of marketing. “This is always a difficult decision but it is the best thing for the health of the company.” 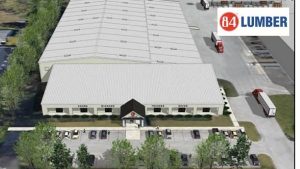 84 Lumber in Richmond announced in September 2019 they’d be moving to a new facility.

The company has already begun the consolidation process at its Richmond location as reported by [DWM]. In September, the company consolidated several stores in the Richmond area into one 92,000-square-foot facility.

Smiley also hinted that the company is planning to grow its business in the West.

“84 Lumber looks forward to the bright future ahead with our expansion plans into the western part of the United States,” added Smiley.

Smiley did not respond to requests for more detail about the size of the expansion and the number of expected closures.

All of this comes on the heels of another announcement from the company in November, releasing that it had entered into a new financial agreement totaling over $700 million in credit. The company announced that part of the funds would be used to focus on increasing productivity through information technology systems and processes. Smiley would not confirm if any of the funds would be used to support the announced western-expansion.

Stay tuned to the [DWM] website and publication for future updates.