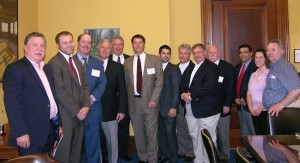 Members of the Northeast Window and Door Association (NWDA) participated in a Washington “fly-in” yesterday during which members were able to speak with a representative from Sen. Olympia Snowe’s (R-Maine) office regarding the 30/30 criteria for door and window tax credits provided for in the American Recovery and Reinvestment Act. The legislation includes a $1,500 tax credit for energy-efficient doors and windows, but specifies that these products must have a U-factor and solar heat gain coefficient of .30-and many industry representatives have been wondering where these figures originated, as they differ from ENERGY STAR and offer a “one-size-fits-all” approach throughout the nation.”Last fall, during the debate of which tax credits should be extended this [window tax credits] were not included,” said Patrick Woodcock, Snowe’s legislative assistant. “She was irate.”

He said the credits were taken out because the cost had ballooned to a billion and a half dollars per year.

So when the stimulus legislation came out in early 2009, Woodcock said Snowe was pleased that the proposal included windows, which he points out account for the largest part of the 25C tax credits. But as costs of the legislation continued to rise, cost became an issue.

“The score [costs] went up to $4.5 billion,” said Woodcock. “The Senate then looked to this provision for where to cut.”

One proposal from Snowe that was not included in the final bill is that the window tax credits would not take effect until January 1, 2010.

“By doing it now, Senate leadership thought it would save $700 million,” said Woodcock.

He added that Snowe would have even liked to see the tax credit at a higher number. “It was a modest tax credit,” he says.

As to why the 30/30 numbers differ from ENERGY STAR, Woodcock said the Department of Energy didn’t have its final criteria published, which made it difficult during the writing of this legislation.

He also said the final decisions regarding this were made rather quickly at 3 o’clock in the morning as the legislation had to be finalized. One NWDA member joked that next time he can call him to get valuable input.

But it’s evident that the numbers were made more stringent perhaps than ENERGY STAR so all manufacturers wouldn’t qualify, which would save costs.

Once Woodcock explained how the legislation came to be, NWDA members told him that, while many manufacturers couldn’t meet the 30/30 numbers right away, soon most will be able to hit those numbers.

“As soon as you came out with these numbers, the industry went to work,” said Darryl Huber of BF Rich, who also serves as the NWDA president.

Tom Channell of Chelsea Building Products, NWDA second vice president, added that his company has spent a quarter of a million dollars helping companies recertify their products to meet the 30/30 standards.

Several attendees asked if the fact that more companies will soon be offering products that meet the criteria would cause the numbers to change again.

The group then asked a variety of questions all relating to how the criteria will be enforced. Other questions include what happens to those consumers who purchased windows from January 1-February 17.

“No one should be able to answer that question,” said Woodcock. “Only the IRS can answer that.”

“What concerns me the most is that there is no reference to a standard in the legislation,” added Jon Hill of Keystone Certifications.

Woodcock advised the NWDA to offer their comments regarding enforcement, etc., to Snowe’s office and she will make sure the comments are given to the IRS as that agency works out the details.

But while many in the industry have criticized the 30/30 criteria, some NWDA members say the bill did fulfill its intended goal, to help stimulate the economy, and in doing so, the door and window industry.

“We as a group are pleased this bill passed,” says Channell. “This revitalized a dying industry.”

“And it stimulated jobs,” Huber added.

“We were concerned with this proposal and we tried to improve it as best we can,” added Woodcock. ” … Tax credits do move companies to make more efficient products.”

Approximately 12 members participated in the meeting with Woodcock yesterday.

Earlier in the day, Richard Karney, program manager for the Department of Energy’s Energy Star program, spoke before NWDA members regarding Energy Star but also addressed the tax credits.

“It hit me as quickly as it hit you,” said Karney. “We received many inquiries asking, ‘Why can’t you fix it?'” He then joked, “Even I can’t fix it.'”

He said even DOE found out about it at the eleventh hour.

“We had no idea it was coming until 24 hours before it was passed.” He added that DOE was never consulted on the criteria.

“Congressional staffers said that if it referenced Energy Star the cost to the U.S. Treasury would have been too high,” Karney said.

However, he did say there are two schools of thought on the issue and said he doesn’t have an opinion either way.

“First, I’d love to see Energy Star specified as it would give the program more credence. The second school of thought is, Why not make the windows more efficient?”

He also brought up a point that many NWDA members asked as well.

“The tax credit doesn’t specify a particular rating. Is it center of glass, etc.”

He says the DOE is asking the IRS for clarification on this matter.

On April 22, the IRS issued some information regarding the tax credits. CLICK HERE to read that information.